Calculating compound interest can be tricky and intimidating. However, there are some shortcuts you can take to get a quick estimate of growth rates. A common shortcut is known as the Rule of 72.

The Rule of 72 is a tool used to estimate how long it will take an investment to double at a given interest rate, assuming a fixed annual rate of interest.

Using the Rule of 72, you can easily determine how long it will take to double your money.

To figure out what interest rate to look for, use the same basic formula, but run it backward: divide 72 by the number of years. So if you want to double your money in about 6 years, look for an interest rate of 12%.

The basic algebraic formula looks like this, where Y is the number of years and r is the interest rate:

This rule works for interest rates from about 4% up to about 20%; after that, the error becomes significant and more straightforward math is required. However, for 4%–20%, the rule works remarkably well. 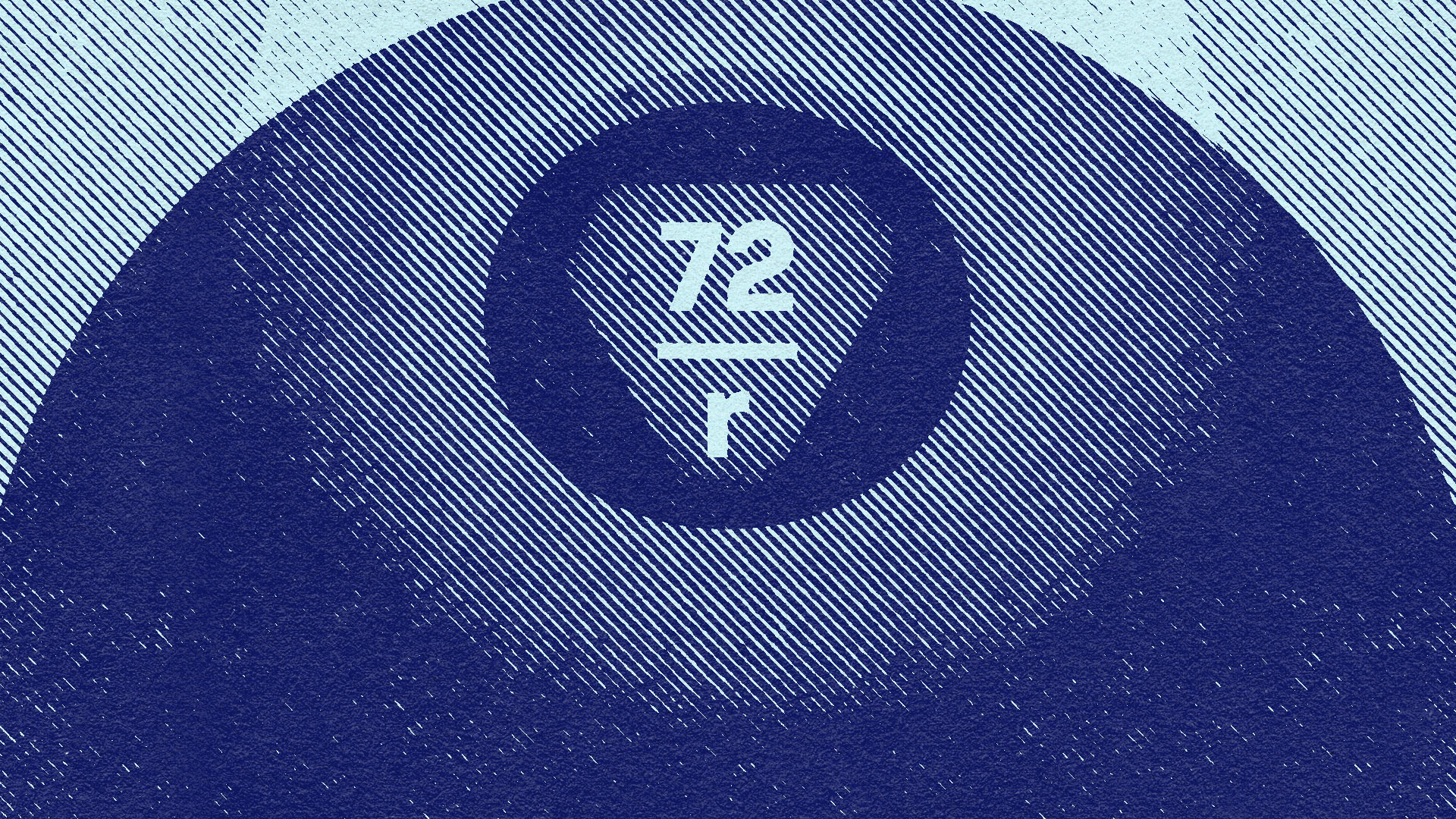 Here, we merely scrape the surface of that “more straightforward math.” To really dive deep into why the rule works, check out this article.

The Rule of 72 is itself an estimation. It uses a concept called natural logarithms to estimate compounding periods. In mathematics, the natural logarithm is the amount of time needed to reach a particular level of growth using continuous compounding.

When dealing with continuously compounding interest, you can work out the exact time it takes an investment to double by using the time value of money formula (TVM) and simplifying the equation until eventually, you are left with something like this:

The natural log (ln) of 2 is about 0.693. Solve for interest rate (r) or number of years (Y), and then multiply by 100 to express as a percentage or year, respectively.

First, that just doesn’t sound quite as good as “The Rule of 72.” Second, there are two points to remember:

The math equation for fixed annual interest is slightly more complex, and simplifying it leaves us with approximately 72.7.

The Rule of 72 was first introduced in the late fifteenth century by the Franciscan friar and Italian mathematician Luca Pacioli. A contemporary of Leonardo da Vinci, Pacioli is considered by many to be the father of accounting. The Rule of 72 was introduced in his book Summa de arithmetica, geometria, proportioni et proportionalita, published in 1494 for use as a textbook for schools in what is now northern Italy.

Disclaimer
While we hope you find this content useful, it is only intended to serve as a starting point. Your next step is to speak with a qualified, licensed professional who can provide advice tailored to your individual circumstances. Nothing in this article, nor in any associated resources, should be construed as financial or legal advice. Furthermore, while we have made good faith efforts to ensure that the information presented was correct as of the date the content was prepared, we are unable to guarantee that it remains accurate today.

Neither Banzai nor its sponsoring partners make any warranties or representations as to the accuracy, applicability, completeness, or suitability for any particular purpose of the information contained herein. Banzai and its sponsoring partners expressly disclaim any liability arising from the use or misuse of these materials and, by visiting this site, you agree to release Banzai and its sponsoring partners from any such liability. Do not rely upon the information provided in this content when making decisions regarding financial or legal matters without first consulting with a qualified, licensed professional.
Related Content
calculator
Retirement
1 min activity
Rule of 72 Calculator By Interest Rate
Figure out how long it will take for an investment to double.
article
Investing
3 min read
Avoiding Inappropriate Investments
There's outright fraud and there are inappropriate investments. Stay away from both.
calculator
Retirement
1 min activity
Rule of 72 Calculator By Years
Figure out what interest rate you need for an investment to double in a set number of years.
Whether you're buying a home, saving for college, or planning for retirement, Community First Credit Union can help. Type your information below, and a representative will be in touch pronto.
Thank You!
We've received your information and will be in contact soon.
Whoops!
There was an error sending your information. Please refresh and try again.
It never hurts to ask. Community First Credit Union has finance professionals eager to help with your next adventure.
To start claiming rewards, create an account.
I already have an account.